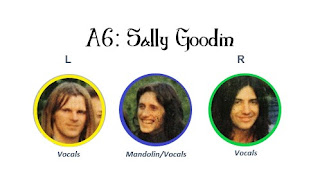 A traditional song that Moore had heard from Woody Guthrie, but one that feels right being sung in an English pasture. I associate gooseberries with England, but apparently they are eaten in parts of the United States too. Covering this song was the idea of Moore, who also arranged it (he told me the rest of the band wasn’t that into the idea at the time). On its surface, the song is about a lost love who you'll give everything up for, even a tasty dessert. In the Guthrie version below you’ll hear this version is very similar, though noticeably Guthrie sing “had a piece of pie/had a piece of pudding” while Heron sings “had a peach pie/had a peach pudding.”  This is a perfect illustration of how folk music lyrics change over time.

You do wonder if the reason they recorded it twice was just because they had done two usable takes and they needed more content for a otherwise short album, but the song does bookend the album nicely. This version would’ve been at the end of Side 1 of the original LP. It’s only about 23 seconds long, but made longer to allow the first side of the album to fade out on only sounds of outdoors.

The song starts with Moore playing and singing, then Apps joins on the right, and Pook on the left. I thought that maybe this would’ve been the track where Jones actually sings too, but it’s just the three main singers, so I’ll have to be baffled over why Jones has a vocal credit on the album for a little longer.

Hank Williams also sang this song as a farewell song, as did Doc Watson. It’s also often known as a fiddle tune. But the exact story of what the song is about is a bit of a mystery. I found a person on ancestry.com trying to figure out if Sally Goodin was a real person (perhaps with the last name Goodwin). Another person responded that Sally was a very real person, a slave who had many children with her owner and was subsequently sold, the song being from the point of view of a daughter who never got to see her mom.
The Bluegrass Picker’s Tune Book says that the song was originally called “Boatin’ Up Sandy,” referring to the Big Sandy River, and that Civil War confederates had renamed it after a Sally Goodin who ran a boarding house on the river. But again, you can find all sorts of theories on the Internet, and these are just a few.

Sources agree however, that the fiddle player Eck Robertson popularized the song in 1922 and its sort of known as a rite of passage for fiddle players to be able to play the song. Eck Robertson would say that the song was about a girl named Sally who had a fiddle contest to see which boyfriend to marry. She also was said to have many children, Eck would joke that she had 14 children, so he learned to play the song 14 different ways.

Here's fiddle-player Daniel Carwile playing the song and talking a little bit about it.