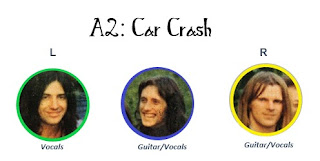 So a little bit of a different mixing – Moore’s guitar comes in the middle at the beginning and then pans over to the left; it seems to sort of pan around during the song. It’s an evocative song, arranged in parts as a round, much like Sally Goodin. With three voices that can sound very similar, a round is an interesting choice for exploiting these similarities.

Moore explains, “Both Roy and Tony had mid-range voices, singing mainly in unison with Roy singing some lines in harmony then returning to the melody and unison. This with the mid or slow tempos created a thick, almost carpet of sound. When I joined I added harmonies above them to add more color. In those days my voice had a higher tone and we got a blend easily and naturally.”

Credited to Pook and Apps, the title and subject seem strange for a pastoral setting. Pook particularly had said he didn’t like the initial recording sessions in the studio, and knowing that the album was recorded near the farmhouse where Pook’s family lived, you can hear the rural/urban divide in the lyrics and tone. We go straight from the farm of “Yellow Roses” to “city is all wet again/footsteps in the driving rain,” and the juxtaposition makes me think of a country boy recalling what he saw that day when he visited the nearby metropolis. There is rain, an attractive woman, and a car crash: melancholy, beauty, and (potentially) tragedy. This song also makes me think of Fairport Convention’s tragic 1969 bus crash.

Music wise, the song starts with bird call, and gentle picked guitar – presumably Apps, then joined by Moore picking a different pattern. When they both come in together, Pook sing in the left and Apps the right. Eventually Apps, then Pook, then Moore perform the song as a round on “Goodbye for now be yesterday/tomorrow will be Saturday.” Jones does not appear to be on the song. The song finishes off with silence and (I believe) Pook saying “there’s little black things all over the place,” to words of agreement by Moore and Apps.

Here’s Heron playing Car Crash in Bridport in 2009 without Moore, but with Jones, new member Gerry Power, and a violinist:

City is all wet again
And footsteps in the driving rain
Strike shadows in the dancing, glancing, taunting pain that frees the air
And your eyes take in the ensuing fun and I’ve seen the eyes of the only one for me.

Seen her eyes, been in her mind,
I’ve seen the face I know I’ll find
In a tiny room of yesterday, car crash in the street that day out in the city
Yes your smile was one that people saw in the garden place I’ve been before with you.


Goodbye for now will be yesterday
Tomorrow will be Saturday
Running damp of raindrops is as water paint to wash away thoughts of you
As your fingers play the gentle string that floats on air blown by the wind from sea.
Posted by Candle-Ends at 2:07 PM No comments: