Hello -- here it is, we're wrapping up Red Shift for now. But maybe as we discuss in the podcast it will be reopened again in the distant future?

Here's the audio. But have you heard the good word about apple podcasts or your podcast reader of choice?

Here are some cool shots from a cool TV movie:


Here's the Spotify playlist (which now has music from both episodes):

Quest Out Your Town

I hope that you have a place nearby you that you can visit — as a little quest. The idea with a quest is that first you decide a purpose, and then you seek that purpose. For my purpose this evening, my wife had pointed out that the reading material in the bathroom was months old, being just World Cup magazines and a Mojo from March (it had Nick Drake on the cover).

But not everyone lives near someplace they can have a quest. I used to live in Park Township, Michigan which is near Holland. There were no stores or anything I could walk to, though I could walk to the beach of Lake Michigan which was wonderful. But I think having a corner store or a community area that you can walk to is really important and really great to have.

So I was like, okay I’ll go downtown and buy some magazines — my wife wanted “fluffy comics” like Over the Garden Wall, which I’m just going to go ahead and recommend, for everyone, the comics and the TV show. I live near downtown Royal Oak – at least a half mile away, but it’s a great walk for me and it’s my favorite sort of exercise — just walking somewhere.

Anyway, I found a Little Library with one of Carl Oxley’s Bunnies stuck to it. It had a bunch of comics in it. Here is what I found and took: 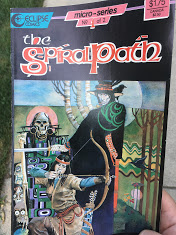 It's funny when you find something that ties in neatly to other things you've been into. I haven't had a chance to read this yet but it seems to be about old stories from The First Nation? Or a tie into a broader older religion? I don't know! But it involves topics that I've been thinking about especially after I found about this Michigan folklorist who wrote on Birch Bark.

Anyway I continued downtown and visited Paper Trail books. People said they didn't think the place was going to last what it appeared, but it is so full of good stuff now that you cant help but stop by and pick something. There was a lady who had dared to stop by the cart outside the store and then couldn't stop herself from buying books. You have to love real books. And . . . comics! They have those too, and board games and music. Here are some comics I found: 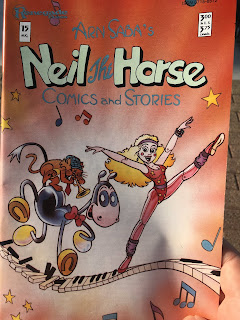 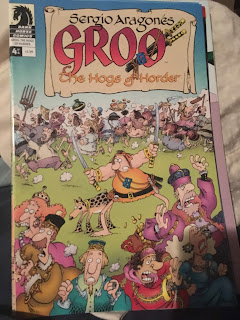 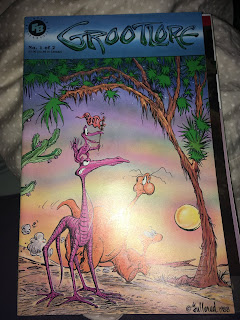 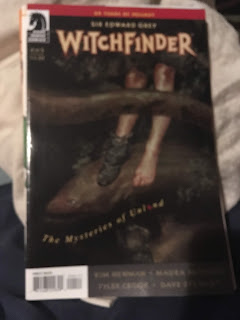 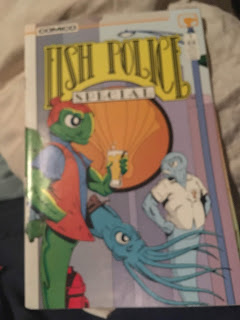 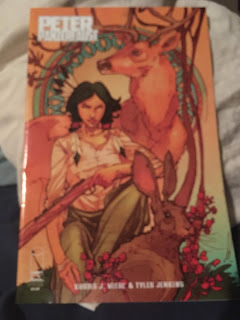 And others! To be honest some of them might have been found at UHF Records, because they have cool stuff too (read below).

Then I went to SCOUT which is a beautiful store that you should go to. I love all the gift items that they have. I bought this awesome Hippie Modernism book here which was the book from a touring art exhibit that was at the Cranbrook Art Museum. You should just come in here and look around. It and Saffron are my favorite "vibe" stores in Royal Oak (okay and Rail and Anchor), and I don't generally buy women's clothing!

So yes, then I went to UHF, which is so great. I can't reiterate this enough -- if you are lucky enough to be near a downton where you can go buy cool things, do it!  UHF has cool VINYL ALBUMS for $1 each. I bought this. 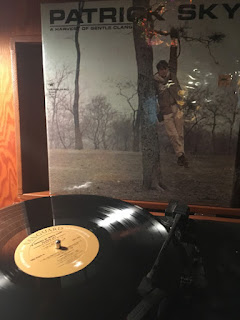 Patrick Sky, "A Harvest of Gentle Clang." This was was only $6 as you can see. It's great. I think I've found my own, personal, singer song-writer. I was just thinking about Buffy St. Marie today, and Sky dedicated the album to her. Both UHF and Papertrail helped me with the spare change I was lacking which is a nice gesture — I paid it back by giving my change later to the gas station. That's a good way to go through a day I think.

Anyway after UHF I heard piano music and found a soulful piano player Brianna Dee Kingsley who was just going to town on the piano. I put the video up on YouTube.

Then I went to find the Speakeasy in Royal Oak. It's part of Mr. B's. Well, I think I went too early, because they are only open between 7-1 in the morning. If you want more information you'll have to find it.

So instead I went to Hopcat. Why? Because the view is the best up at the top. I sat up there and drank a wonderful MICHIGAN Blake's Hard Cider RAINBOW SEEKER: 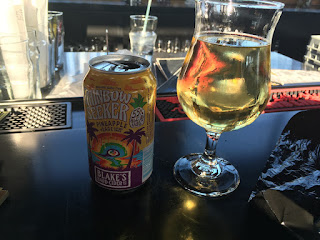 And an Arbor Blonde Redhead (not pictured).

Then I just came home. This was all fun for me, and while the kind of things you might quest for might be different from mine — I hope you can find a quest near your house and have a good walk too.

Yes I am derelict in my duties to part two of Red Shift — but I'm half way done. I think!

Posted by Candle-Ends at 8:32 PM No comments: