Yes, I got an email from G.T. Moore which was so cool. It really felt like a connection with a puzzle that you’re not going to be able to solve by yourself. And he helped me with those few nagging questions I had about figuring out these tracks. So here’s the beginning of the breakdown of Heron (1971). 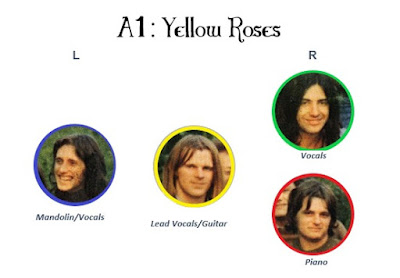 There is faint birdsong from the beginning. Steve Jones’ delicate piano is on the right of the stereo mix, with Apps’ gentle guitar strumming central, and Moore’s ringing mandolin on the left. The combined fade-in effect is that of walking over a grassy hillock and discovering the band playing in a sun-lit field.

In delineating their voices, I would characterize Apps’ voice as the smoothest, which comes in central with his guitar. Peter Eden seems to have produced this with a live concert feeling – letting the stereo mix audibly dictate where each band member is, and what they are doing. However, he does not keep the same mix for each song – the band member who is singing lead vocals is usually front and center for the track.

This song presumably existed when Apps and Pook were a two-member band (before Moore and Jones joined), as it begins with a nice vocal interplay between those two bandmates. Pook joins on the first chorus on the right. His voice can be characterized as occasionally more nasal than the other two singers, though it's actually quite versatile -- I only recently learned that he was the singer on Moore song "The Devil" on their second album.

G.T. starts humming under the chorus, and then takes the next verse alone, on the left. I’ve had trouble characterizing Moore’s voice on the records – it can be perfectly complimentary and mild when he’s providing backing vocals, or have a freewheeling nature to it when he’s on lead. Mercurial then? Eventually on “Yellow Roses” they all sing together, in a very clever arrangement. The song fades out ending with Jones’ piano and wind and birdsong raising in volume.

Lyrically, the song seems to be a plea to a woman to accept a man who cannot offer as much as is expected from him. And it’s a rural setting (“there he stands on the farm”) and features the folk music archetype of the poor young dreamer boy, transfixed by windmills and only able to offer yellow (not red) roses – which traditionally means friendship more than romantic love. But his music is what makes him special (“no night bird will sing the songs he’ll sing you), and I wonder if this song originated with “I” instead of “he” as a more personal song from Apps, before it became a band song – it might’ve been odd for Pook to harmonize and say “I” instead of “he.” To tie this into our folk horror podcast, the main character is reminiscent of young, fragile Tom from Tam Lin or Red Shift – someone who needs to be held, because “it’s the only way.”

Here’s a video of the band performing the song in (I think) 2016. You’ll see that the division of work is similar, definitely an Apps-led piece. Right to left the band is Apps, Pook, Moore, Jones:

There he stands on the farm
With his eyes on the windmill
And his head goes round and round
Like the hours of the night will.

And who knows where he hides
Only somewhere inside him
It's the only place he's found
Where no fences surround him
You might find him in the darkness kneeling
He's found no reason for this love he's feeling
So when he wants you now and again
Don't let the time slip past you all in vain
All in vain.