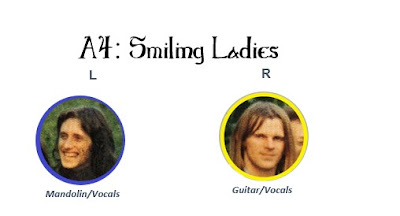 I’ve been really trying to hone my ears on picking out their individual voices but it is tough sometimes. But what I think we have here is a duet between Moore and Apps, with Moore at the left with his mandolin and Apps at the right with his guitar. So nice to hear a collaboration of the two main songwriters in the group.

This is an Apps song. I get the feeling that Apps has some particular love for the Incredible String Band and Donovan in addition to the almighty Dylan who seems to be a love of all the group. They reunited to do a Dylan tribute album entitled Jokerman in 2016.

The track “Rosalind” which was recorded at these field sessions, was left off the album and I wonder if it had a lyric that was a little too close to Donovan. “Rosalind says catch the wind and put it in a bag/Made of sea shore sand.” (The song also includes a mention of herons.)

“Smiling Ladies” includes lines daringly close to Dylan and Incredible String Band. “Turning back my paces” in reminiscent of Dylan’s “My Back Pages.” “The music has no edges” is reminiscent of ISB’s “the song has no ending.” I am not suggesting anything other that if you were writing in the same vein of some of these songwriters, you can’t help but stumble over similar sounds and symbols. Think about how many folk singers had songs about “jokers” (or “harlequins” for that matter) after Dylan’s “All Along the Watchtower.”

Nature imagery and stillness are the themes again, which seem central to Apps songs. Definitely a sadness to this musing about the human struggle of immobility vs. action. It seems like other people are starting the day, while this young daydreamer just wants to think about the beautiful women he’s met

There’s a long pause at the end with just natural sounds. Interesting to note that the nature sounds were recorded later because they just didn’t get picked up with the microphones enough the first time. But I don’t fault them that, I’m sure it’s roughly the same sounds.

Here's a great version of "Smiling Ladies," without Moore, with Gerry Power. Lovely accordion from Jones:

Breath on breath of morning wind
Stirs the curtain laces
You may go to chase the sun
Or vanish in its changes
I will stay to gaze upon
Sweetly smiling ladies
Yes I will be turning back my paces.