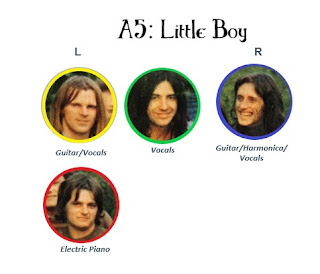 A Moore song that Pook liked, so it was given to him to sing. Now that I’m able to pick out their voices, I feel like each one subtly reveals a personality. I feel like in a more regular band, Pook could’ve been the solo singer and maybe even a bit of a pop idol. But on the other hand, it seems to be his personality which influenced the band to leave the studio for the field outside Pook's parent's farm.

This song seems to be about a young friend who’s having difficulties with growing up and interacting with the world around him. I often picture the character Phil Daniels played in “Raven,” a boy released from a juvenile detention center who struggles to fit into with his foster family. Someone who has tried to do their best but ended up shunned by society. In hearing the song a few time I wondered if the song is a bit of a "telling off" in the same vein as Dylan's "Like a Rolling Stone."


There’s a certain awkwardness to the “please don’t hit” line, but it also seems authentic – like the writer is a little afraid of this “one time singer, one time loser” and has to insist that he staggers off and helps himself somehow. Or if you think of the song a different way . . . the “Little Boy” could be the writer himself, saying the immature parts of himself need to go away.

Musically the song starts with Pook hitting the harmonica note played by Moore, with dual guitars on the left and right and Jones’ piano in the left. After a little bit of looking online I believe that what Jones is actually playing is an electro-acoustic instrument called a "pianet." The Hohner-Pianet N, to be more precise, as featured in their field photo and in this video:


Apps joins on the left singing, and Moore, who sings on the right on the second verse, also adds harmonica. The song seems to fade out into what sounds like, let’s be honest, the perfect afternoon.

Here's Heron doing "Little Boy" with Gerry Power. Interesting because it's one of the only Moore compositions they're filmed doing in this concert, I believe. Perhaps still a favorite of Pook?

I'm a little unsure about some of the lyrics here. The above video helped, but they seemed to have sang it out of order anyway:

Little boy you must be honest
You are all alone tonight
Run your fingers along the railing
Where all the ladies made you sly
Though the whole world betray thee
As you stretch your neck to kiss
Let your arms hang by you easy
Please don’t hit.

Little boy you must be unhappy
There is no one that you love
There is no one here to help you
If you will not help yourself
Though the whole world betray thee
As you stretch your neck to kiss
Let your arms hang beside you easy
Please don’t hit.

In the street and down the arcade


Where all the flowers will drip


There must be no other way


But let there be no doubt about it
You cannot stay.
Posted by Candle-Ends at 8:22 PM