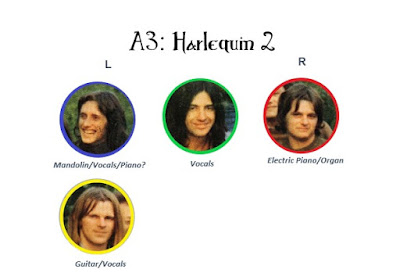 Hard to say exactly if I got the above order correct. There’s clearly organ that comes in on the right, and piano that comes in on the left. Apps is credited with piano on the album, as is G.T. Moore. When I inquired from Moore if there had been any overdubs that may have disturbed the perfectness of an album seemingly recorded live in nature, he replied, “I think we/I added a few overdubs in Pye studios that were very minimal. Some Hammond organ and maybe a bit of guitar but almost nothing.”

The famous picture of the band that graces Electric Eden, shows Jones playing some sort of portable piano, but the piano playing on this track is minimal in the album version and starts with a sort of standard glissando, so I wouldn’t be surprised if it was done by another member of the band instead of Jones. This is a Moore track, but one that he gave over to Pook to do main vocals. He (and later) Apps come in with enthusiastic, almost Dylan-esque backing vocals on the left where Moore’s mandolin resides. “But then the sun comes shining through!”

This song is like an ambitious mini prog-folk epic, and I’ll say right off the bat that I much prefer the unedited version that was released of this track (also mixed differently). Apparently there was a musical flub in the recording, which I can’t really discern – this is a band which at times can be a bit shambolic – though there does seem to be the sound of a distant plane right after the point where they cut it. And while the album version ends with the band singing loudly “could it be that I’ll never forget her” (which then goes straight into the next song on the album) the full version has much more of a musical journey, with its lengthy instrumental bit and a much more subdued, repeated, fading, “it’s been so long now, I can’t quite remember.” This lyrically fits into a common theme on the album: a comparison of the passing of time vs. the appreciation of a moment.

There are three “Harlequin” songs in the Heron repertoire, which also includes Harlequin 5 and Winter Harlequin from their second album. I had wondered if it was the less used meaning of the word harlequin as something phantasmagorical or psychedelic, but Moore responded that the use was in reference to the colorful character made popular via Commedia dell’arte, “I’m not only a musician but a painter and it was a tradition Harlequin and Pierrot. Basically it’s a bit stupid but if I had a song that I couldn’t think or didn’t want to think of a name for I just called it Harlequin and I think there was something like five harlequin songs, maybe six. Heron laughed at it but it became a bit of a joke. They were just a bunch of different songs.”

It may be wrongheaded to look to into the lyrics of some of these songs, when clearly many artists of the time were jotting down hippy stream-of-consciousness lyrics and calling it a day. However, I find that the band’s lyrics of the time remarkably sincere and well-crafted, avoiding obvious rhymes and lyrical pitfalls other bands fall into.

So what is this song about? I think it’s about how you can live in a fantasy world like a young child, but inevitably you have to face the world. And when moving on from a relationship, is my new reality going to be that I’ll never forget this person, or will it just fade away as a distant memory. The first verse does make me think of Dungeons and Dragons or Minecraft though.


Once upon a time children played with fantasy
All in the land of the season
When children play it’s a world of reality
With no apparent reason.

But then the sun comes shining through.
And there’s nothing that you can do.

It’s been so long now I don’t quite remember
Could it be that I’ll never forget her.

Or maybe I could come round this winter
But if you could only hear me
You’d know that winter is a season
Not necessarily near me.

It’s been so long now I don’t quite remember
Could it be that I’ll never forget her.